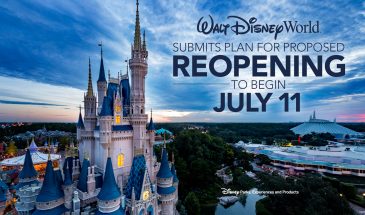 Right now is a moment to capture. To crave. To savor together. Because now, more than ever, Walt Disney World® Resort has more to see, do, taste and experience than ever before. We’re going to satisfy your craving for an amazing array of the Disney magic you love.

Feel like playing big? Disney’s Hollywood Studios® is now more playful than ever with the larger-than-life attractions at the all-new Toy Story Land. Want to get wild? Disney’s Animal Kingdom® Theme Park is generating more goosebumps than ever as banshees soar through the bioluminescent land of Pandora-the World of Avatar.

Looking for something delicious? Epcot® is now more flavorful than ever with festivals offering the best in food, art, music and more. And if you love IllumiNations: Reflections of Earth, you must experience it now more than ever during its farewell. At Magic Kingdom® Park, Happily Ever After fireworks light up the sky as Cinderella Castle is transformed into magical Disney settings.

Love surprises? Magic Kingdom Park will be more magical than ever-with our new Mickey and Minnie Surprise Celebration. Join a whimsical procession down Main Street, U.S.A., one-of-a-kind musical moments in every corner, and a bevy of beloved Disney Characters everywhere you look. Plus, don’t miss out on limited-time magic with delightful entertainment, imaginative new merchandise, food and beverage treats, and more.
We’re also making Disney’s Animal Kingdom Theme Park more Hakuna Matata than ever. To celebrate The Lion King as it roars back into our hearts, we’ll feature classic and new ways to live this beloved tale during the film’s 25th anniversary year.

And if you can’t get enough Pixar fun, Disney’s Hollywood Studios® will be more playful than ever as whimsical new ways to party with some of your Pixar pals adds to the fun of the all-new Toy Story Land.

mosaferan is a licensed and accredited online travel agency based in Maryland USA.