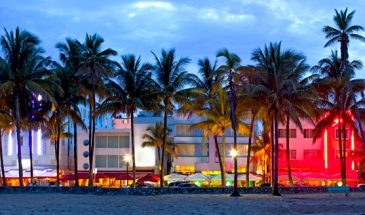 Known as one of the most eclectic cities in the United States, Miami exudes an air of cultural diversity mixed with a laid-back beach town feel. It is one of the hottest vacation destinations in the country in terms of both temperature and popularity due to its southern location, proximity to the Atlantic Ocean and Caribbean islands, and its bustling social and nightlife scene. Many visitors come to Miami to relax on its numerous beautiful beaches and enjoy the warm tropical savanna climate. The city also boasts a melting pot of cultures, especially Latin American, Caribbean, and Cuban ethnicities, which all contribute to the great diversity of music, food and language that Miami is so famous for.

The city is one of the smallest in the United States in terms of total land area (only about 37 square miles, or 92 square kilometers), but has a metro population of over 2.5 million people. It's also one of the only major cities in the country that is lucky to be bordered by two national parks: Everglades National Park to the west and Biscayne National Park to the east.

mosaferan is a licensed and accredited online travel agency based in Maryland USA.